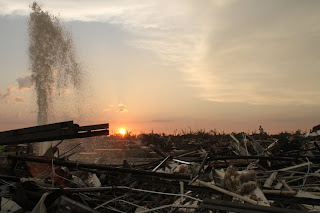 Tony Anderson lives in Lexington, Kentucky and was in Joplin during the tornado for his brother’s graduation.  Tony and several others left the place they were staying to go out and begin trying to help people.  They went way beyond the call of normal to step out and be Jesus to those who had lost everything.

Tony, you were on the streets fairly soon after the tornado. What made you leave your house? Why not just stay put?

I was about 6 blocks away from where the tornado finally lifted after carving a 6-mile path through Joplin…it’s crazy that the thing didn’t hit us. I remember driving around the least affected areas thinking that we were seeing the worst of it and having my mind blown by the destruction. It took an hour before images showed up on TV revealing the real destruction in the heart of Joplin’s business district. I couldn’t believe it. In a lot of ways, I still can’t. I was in a room with 15-20 other people – absolutely appalled – when my friend, Biaka, busted in the door and said he was going to help people. He asked if I wanted to join. I hesitated, thinking “What good would I even do in a situation this bad?” but something was nagging inside of me, so I ran out the door with my dad and 2 of my brothers and started driving. I think in situations like that you’re not entirely sure what’s going to happen, but we knew that there were people dying, trapped and in need of help. Military and police had no control over the city at all, and until they regained some type of communication system we knew we had a 24 hour window to go outside the lines of what a typical civilian would do.

The first place we showed up was a triage center that had been established right after the tornado hit at a place called Memorial Hall (typically used for concerts and shows). Biaka and I were told that we couldn’t do any good since we had no EMT training, but we ran past the lady trying to stop us and started pitching in. We got some gloves and immediately began unloading bodies from trucks that had been turned into makeshift ambulances. As we brought wounded into the main arena, I quickly realized we had walked into a war zone. People were screaming, crying, bleeding….it was absolute chaos. Hundreds of nurses and doctors had shown up and were already treating victims, but we could tell they were running low on supplies. Nurses were holding IV bags in the air because there weren’t any stands to put them on. The rest of the night and the following days were spent searching for missing people, clearing debris, tracking down friends, establishing a supply command center at a facility in town called “The Bridge” and trying to process what had just happened to the city that had become a home away from home for me and so many others.

In my case, it would have been easy to stay at home and do nothing. That’s actually what I had planned on doing, but I kept thinking about Jesus. He took things that weren’t his fault and made them his responsibility.

What went through your mind the first time you surveyed the damage?

The first time I got a good look at the damage I was in absolute denial. I felt like I was seeing visually altered images in a movie…not real life. The thing that made it real was the smells. Freshly split wood, natural gas and fuel filled the air. Fires were burning out of control. As night fell on the evening of the tornado, I got a minute to myself in the Wal-Mart parking lot and looked at the sky…lightning was raging out of control in the distance; illuminating a pitch black Joplin without power. The only thing I heard were muffled roars of distant thunder covered up by a never-ending symphony of military helicopters and sirens. There’s no category in my mind for a situation like that…especially in Joplin. I think my mind was in another place…might have been absolute shock. Nothing hit me fully until I hit the interstate on my way back home to Lexington later that week. The second I started down I-44 Eastbound, I lost it. Uncontrollable tears and sadness…I felt like I was abandoning a child. That sounds really dramatic, but I think when you know the city that gets hit you don’t react in the most logical way. You’d think that a person would react right when they’re submitted to the chaos, but for me and for many others the adrenaline and shock had to wear off first. Here in Lexington I’ve found myself sitting in traffic absolutely zoned out, thinking about the destruction I saw last weekend. It does something surreal to you. A high school student named Will Norton was part of a group that met for 3 years. My friend Jordan Howerton and I “led” that group of high school guys through life for quite a while – I found out on Wednesday morning that they found his body in a pond near where his car was found. He was sucked out of his sunroof by the tornado. It’s stuff like that that’s hard to process. I think I finally started to have it all sink in a few days ago…unreal.

How has the church reacted to the destruction?

I have never been more boastful of Jesus. The mainline responders and providers in the community are the churches. The Red Cross and FEMA are there, but they can only offer physical healing. They do little to nothing for the legitimate needs of the soul. Nothing makes me sicker than watching relief organizations send people to hell with a full stomach and a case of bottled water…they ALL have incredible opportunities to introduce people to Jesus, but seldom do they take them. That’s been the opposite with the churches in Joplin, Webb City, Carterville and Oronogo. There are several of them working together aggressively to love and serve the city. You honestly can’t tell who’s who when you’re working alongside all of them – the church names have sort of faded to black and everybody’s working in Jesus’ name to bring freedom and restoration to that place. It’s pretty Biblical. I heard that churches were packed the following Sunday after the tornado. People are being drawn to Jesus by the Father…when people’s self-sufficiency is shown for what it really is (an absolute delusion), they tend to start asking really difficult questions and the churches have been there to love and serve the wounded and the grieving in Joplin. Jesus is being lifted to the highest place there. Additionally, most of the Christians who lost everything were outside the next day helping other people saying things like “It’s just stuff…Jesus is our great reward.” Only through Jesus can that be truth. I love it. I’m excited to see how the church sustains this love for the city in the next few years that it’ll take to rebuild and restore.

How can people who aren’t able to travel there help those in Joplin?

First, pray. The weapons of our warfare are not of the flesh, but they have divine power to destroy strongholds. Communication lines need to be improved. Wolves in sheep’s clothing will soon move in and area leaders need wisdom and discernment to identify them. Children have lost parents and siblings. Businesses will never be reimbursed or rebuilt. Psychologically, many people will be a wreck for the next year or so…that city got rocked. The road ahead will be long and hard and once the adrenaline wears off, people will be exhausted. People need healing, perseverance and endurance. Let’s ask the Father to administer healing through Jesus before secular organizations get too involved.

Second, give money. God has worked through his church so quickly that the city is already full of food, water and clothing. Now it’s up to us to get money into the right hands so that vehicles can be purchased, home foundations can be laid and relief can be given to the unemployed. Here are three entities in particular that I know you can trust. Rebuild Joplin seems to be the most efficient so far.

a) Christ’s Church of Oronogo / RHRN (Right Here Right Now) Fund will directly go to the families affected: http://ccochurch.com/
b) The Bridge: I helped set up the communication and distribution system at the Bridge so I know it can be trusted. They’re knocking it out of the park. http://www.facebook.com/thebridgejoplin?ref=ts
c) Rebuild Joplin: http://rebuildjoplin.org/donate