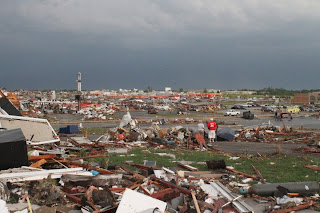 Lance Schaubert currently lives in Joplin, Missouri.  He is an academic, writer, preacher, musician, actor, comedian, and just about anything else you can think of.  Lance is working with College Heights Christian Church, one of the largest churches in the Joplin-area, as they seek to be the hands and feet of Jesus.


Lance, We’ve all seen the footage of the destruction caused by this tornado, but what is it really like right now living in Joplin?

It’s hell. No, it’s heaven. Actually, it’s something like purgatory. What I mean is, it’s the worst of the worst, the best of the best and waiting to see the resolution of the two. Everyone who was here has some sort of PTSD. Everyone who wasn’t has some sort of survivor guilt – talked to two who wanted first for a tornado to hit their house then for their plane to crash.

You cannot possibly imagine the destruction. Pictures capture an angle, but it goes on in every direction toward the horizon in some places with nothing green, nothing civilized, nothing unscathed or unbloodied. You cry for the ones you love. You close off to those who need to talk. You blab to those who don’t. You get angry at America for choosing to cause this kind of destruction to other human beings in other parts of the world. You ache for those who are suffering. You laugh at the hidden absurdities of it all – like a two by four clean-thrust through a concrete curb. There’s terrible pain, but through the suffering of the church in solidarity with the hurting, there’s incredible life and hope and joy. FEMA said this is the best response they’ve seen. I can see why.

Right now, for me, I just want to establish some semblance of normalcy so I can actually be of use. I’m spending today getting back into a writing routine, watching HO– USE with my wife, talking with my dad, answering emails and “swallowing a live frog” as Mark Twain would say. At the end of it, I hope to be rested and healthy enough to hit the trenches again.

I’ve heard that the people who needed more debriefing in Haiti post-earthquake were not Hatians, but relief workers. I’m starting to see why.

Some of my favorite lyrics are the simple phrase “the shadow proves the sunshine.” You mentioned how terrible it is right now in Joplin, is there anything you’ve seen to give us hope?

Oh yes, Jon Foreman. You know, I always heard that Jon made a vow early on to say nothing save that which was profound. He’s come fairly close so far – it took college for me to appreciate Switchfoot’s lyrics. The shadow proves the sunshine indeed. You know, people always talk about doubt like it’s a terrible thing, like faith stands in opposition to it. The opposite of faith is disbelief – belief in something else. Those same people speak of the leap of faith – but I’m always wondering what they’re leaping over, if not doubt? Doubt is the chasm we hurtle over to move from faith to faith. So too with shadows.

I was writing a verse to a song to try and wrap my mind around this recently, and these lyrics came to me:

The President gathered 60,000 heroes
The Governor wept when he quoted the KJV
The Mayor pointed FEMA to the churches
And the Voter burned the ballot, hit the streets

That sums it up for me. I live in a city of sixty-thousand heroes. I live in a city at whom, as Ms. Beck has said, “the microphone of the world is pointing.” I live in a city that moved the Governor. I live in a city taken care of not by the government, but by the church in such a healthy, working relationship, that the mayor turns to places like College Heights Christian Church and says “Here, you deal with these guys. You know what you’re up against.” I live in a city where people would rather love their neighbor than vote someone into office to do it for them, at least in theory. What I mean is, most of these people will end up voting, but unlike many in the US, they don’t wait around for someone to hold their hand and do it for them. FEMA said of the church’s effort, “this is the best response we’ve seen. We’re sorry we took so long to figure out what to do with the volunteers, we just expected it to take a few weeks for them to get here.”

Over and over I’ve heard reports of the church showing up in Joplin while the tornado was still doing damage. I believe this event has spotlighted the incredible faith of the believers in Joplin, Missouri. Now, Lance you and I are both in our 20s and Joplin is home to a bunch of people who look a lot like us (at least age-wise). What do the volunteers look like in Joplin? What’s the general makeup of those who are helping?

Well, first I’d like to note that Joplin’s more than just 20-year-old nomads like you and me. Joplin represents over 70 nations, a phenomenal number considering that Joplin proper only holds 60,000 or so people. In addition, we have one of the best elderly care facilities in the region and we sit on the main north-south and east-west veins of the Midwest. All that combined creates a uniquely diverse socioeconomic scene, explaining the diversity in the obituaries (from 1 year olds to ninety something, and all sorts of races).

Add to that four colleges, one being the most influential undergraduate university in our movement (Christian Churches / Churches of Christ), and you hold influence all over the place. Joplin seems like hickville in many ways, but break it down and you start to see an artery, the heart of the midwest. We make fun of the signs, but maybe City Hall’s not so far off in calling Joplin, “the very best of the midwest.”

So people have come from California, Arkansas, New York, Oklahoma, Indiana, Illinois, Kansas City, St. Louis, and Shanghai, China. Not to mentioned the ages. I saw jars of preserves made by like 80-year old ladies, retired people making PB&j, young kids playing with kids who have no homes now, single mothers doing counseling, fathers of four crossing six miles of ground zero to get to the hospital to help out, and schmucks like me who have no idea what they’re getting themselves into, but want to help if they can. If you can fog a mirror, your demographic is here.

So, what are you learning through this situation? Years from now when your kids find out you lived through this tornado, what do you think you will tell them?

I’m learning about staying. I’m learning that NOLA, Galveston, Haiti, Japan are still hurting in ways, but they’ve healed much from those willing to stay. I’m reading through Jonah right now and Under the Unpredictable Plant by Eugene Peterson. In it, he critiques and rebukes the church for running around so much, chasing a success ladder that doesn’t exist in Christ’s kingdom. He says that twenty, thirty, forty year pastorates should be the norm in our churches. They aren’t.

I wanted to leave Joplin years ago, planned to even. God wanted to teach me about staying here, about waiting until he moved me, not until I moved and plastered his name on it, using his name in vain saying “the holy spirit told me to move.”

It’s hard, it’s terrifying, I want next July to be here right now and pack up and leave, but decades from now I’ll look back, I’ll meditate on the suffering of the church for the resurrection of Christ in this place, of the redemption of suffering, and tell my grandchildren, “That was the first year I stayed.”