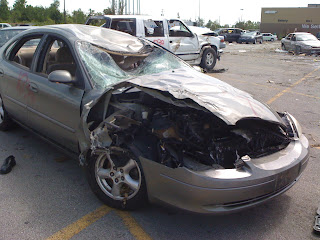 A couple weeks ago Josh and I were in a wedding together.  It had literally been a couple days since the tornado, and when I heard his story I realized he had to share it.  Josh was inside Wal-Mart in Joplin when the tornado hit it.  When I asked him for his story, here’s what he told me:

I was in Wal-Mart getting some stuff before I headed over to spend some time with my family (my mom, grandparents and aunt). They were still in town for my graduation that happened the day before. The sirens started as I walked in and we all were told to go into the back for lockdown. I didn’t think much of it because I’ve been in lockdown in Wal-Mart before for tornado warnings and nothing has ever happened. So I just waited and thought about just leaving and going to my family’s hotel, but I decided to wait it out, partly because my mom told me the sirens were going again and to wait. I got on Twitter and Facebook and wrote “Wal-Mart tornado lockdown party!!! Come join the fun! #hurricanes #hunkerdown” Immediately, lots of people knew I was there, including my family.

A few minutes later the power went out. Yet still I didn’t think anything too serious was going to happen. About a minute passed and then the employee who was running crowd control started getting worked-up and I could hear the tornado outside. I don’t really know how to describe the sound, but other people have described it as a freight train, and that is definitely the best I could do. So I ran into an aisle in the toy section and got down. A big guy a few feet away grabbed me and pulled me together with him, his two daughters and two ladies who worked for Wal-Mart. The scene I saw as I looked back: a ceiling tile fell in. Water and stuff started pouring in and I realized that this was the real deal.

I looked back at the group I was with and then a second later we were being rained and hailed on; the roof had been ripped off. I started praying as loud as I could. The aisles fell over on the other guy and I. That was the worst injury I sustained, just a little bruise. After the rain died down a little, everyone who could started walking out and helping others. Our aisle was a good lane to walk through so I helped several people get through it, including a pregnant lady and a few little kids.

While we were trying to get out, I texted my girlfriend “Walmart collapsed on us.” She had left to go home to Colorado two hours before, thank the Lord, and didn’t believe me! But soon she did. My aunt called me and they heard my voice and shouted that they were coming to get me.

On the way out I only saw one person who wasn’t able to walk out on his or her own. Then I said out loud, “Everyone be honest and don’t steal anything!” to lighten the mood, I guess. It was crazy in there; we could smell gas and everyone started yelling, telling everyone to not smoke!

Eventually I got out. As I was leaving the rescue crews were coming in, the ones I saw from a local church, College Heights. The parking lot was basically a demolition derby cemetery. All the cars were jacked up. I found mine all the way across the lot, destroyed. (See the picture!) As soon as I found my car, I checked in to see what was good. My backpack with my computer in it was fine! (SwissGear is a legit brand.) Then, my family found me. My aunt yelled my name, my mom ran to me, balling. She was a wreck. She told me she thought I was dead.

Since I had tweeted and put on facebook that I was in Wal-Mart right before it hit, everyone was wondering what had happened to me. Since they knew I was in one of the hardest hit places. Word got around that I was ok.

We got a bunch of stuff out of my car that was salvageable, and then we made about a minute drive to my apartment. My roommate was there during the tornado. But they were barely touched, which is good.

Then we went to my family’s hotel. I felt pretty guilty about taking a hot shower and sleeping in a nice bed. Most of my friends were out helping immediately, and all I could do was sit there. But that was where I needed to be, with my mom and resting. Because even though I didn’t want to admit it, I was somewhat traumatized from the whole debacle of the tornado.

One of my best friends, David, called me around 1AM. (I couldn’t fall asleep) I told him my story. I said that I didn’t think that anyone had died there, then he told me, “No, dude. People died there.” That kind of made it even crazier to me. I could have died. But I still thought that everyone in the toy section was fine. A few days later, I found out that people in the toy section had died.  There were so many other places I could have taken cover, but I was where I was and I’m alive.

That night, I wanted to be out helping, digging people out or working at triage centers. But I wasn’t. I had to tell myself that even though it wasn’t me out there, the church was still doing its part and that the next day I’d be able to do work. The church was immediately being the hands and feet of Jesus in Joplin.

Over the next four days, I worked at a place in Joplin called The Bridge, which acted as a distribution center. Joplin will take a while to rebuild, but the Church is there. It will come back, and not without the power of God being made known by his people.